Current research from Hong Kong Baptist University (HKBU) has found that by-products produced by bacteria consuming dead human skin flakes emit urine-like and body odor types of smells that are distributed through a building via the HVAC system.

was conducted under the leadership of Dr. Lai Ka-man, Associate Professor of the Department of Biology at HKBU. Dr. Lai’s team revealed that human skin flakes (skin squames), which are naturally shed, can be returned into the HVAC system’s air handling units (AHU), accumulate and become a food source for the bacteria living within.

It is estimated that a single human can shed between 30,000-40,000 skin flakes every hour, or close to a million over a 24-hour period [source: Boston Globe]! Some of these cells aggregate with other microscopic compounds to settle on surfaces into what we commonly call “dust”. Other airborne skin squames have been found to absorb UV radiation and ozone then safely degrade. However, the HKBU study found that a significant number of skin squames can populate the inside of the AHU even when filters are in use and no visible signs of dust are present.

How are the odors produced?

Skin cells consist of keratins that are structural proteins. They also contain other microbial nutrients like fatty acids, lipids and other natural metabolites. The study found that Keratins consumed by bacteria are broken down to ammonium. When limited amounts of carbon are available in the environment it can lead to excessive amounts of ammonium being emitted which can lead to a urine-like or cat’s litter box smell. Further, when other nutrients from skin squames are also consumed by bacteria they can degrade into various volatile short-chain fatty acids that produce the smell of human body odor or what is sometimes referred to as “dirty sock syndrome”.

“Skin flakes, a common constituent in dust flora of indoor environments, can have ozone reducing capabilities by oxidation. However, their elevated concentrations within HVAC systems may be an odor-causing nuisance, and problematic from a hygienic point of view.” Says Dr. Rajiv Sahay, Director of Environmental Diagnostics Laboratory at Pure Air Control Services, “These cells nurture several microbiomes which can adversely impact healthy living. We have noticed higher concentrations of these particulates in HVAC systems in comparison to other building locations while investigating indoor contaminants.”

The HKBU team also investigated and compared microbial samples from AHU’s with and without odor complaints. After studying the biological properties of the isolated bacteria, they reported that the Staphylococcus species emitted from the HVAC system to be one of the odor causing units. 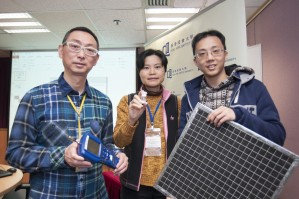 How do these odors affect building occupants?
“Air quality in indoor environments is associated with people’s health and well-being. These odors can lead to discomfort and low productivity” Says Dr. Lai, “Odor problems are due to a dirty air conditioning system – Therefore, cleaning the system is the general practice to eliminate the odor.”

A recent Harvard study backs up the findings that poor indoor air quality can lead to lower cognitive function and productivity. In addition, odors, if severe enough, can also cause allergic-type reactions like itchy eyes, nasal drips and even headaches.

Minimizing the Odors and Risks

As Dr. Lai pointed out cleaning the HVAC system on a regular basis can reduce both skin squames and bacteria. But not all cleaning methods are the same. Conventional AHU and Duct cleaning only mitigate a small portion of the factors that contribute to the accumulation of dust and microbial proliferation. Consider that the pump/spray method of AHU coil cleaning uses very low pressure to spray chemicals on the surface of the evaporator coil fins. This is a quick way to temporarily reduce odors, but what about deeper inside of the coil and the rest of the interior of the AHU? Steam coil cleaning is a far more effective and thorough method to ensure the whole interior of the AHU, as well as completely throughout the coils are completely disinfected.

Downstream of the AHU is the ductwork. Traditional duct cleaning generally is done by quickly brushing and vacuuming the ducts and vents. This process can actually stir up debris and recirculate through the building for a period time. Again, a more careful and hygienic method is recommended. One that employs containment, HEPA vacuums and even disinfecting mists like Pure Air’s PURE-Decon service. It is recommended that AHU and Duct cleaning be performed on a yearly basis.

Finally, specific filters that are regularly changed can help capture airborne skin flakes before they enter the AHU.

“The size of skin squames is generally larger than 10 micrometers (or 0.001 centimeters).” Dr. Lai says, “A filter that can effectively capture particles less than this size should help improve the odor problem.”

In conclusion, when ammonia and body odor types of smells arise the likely culprit is skin flakes and bacteria in the HVAC system. Best practice is to test the conditions of building and systems to establish the nature and severity of the issue. Then a plan can be established to remediate the situation. Of course, maintaining a proactive, hygienic, HVAC and Duct cleaning program will always help to ensure skin squames and bacteria are kept to a minimum while indoor air quality remains optimal.

The study entitled “Skin squames contribute to ammonia and volatile fatty acid production from bacteria colonizing in air-cooling units with odor complaints” was published in Indoor Air (DOI: 10.1111/ina.12439). Another related study entitled “Viable airborne microbial counts from air-cooling units with and without complaints of urine and body odors” was published in Aerobiologia (DOI: 10.1007/s10453-016-9466-y).