Indoor air quality investigations are often initiated by occupant complaints to the facility manager of a building. These grievances are generally manifest through sight, smell and actual physical conditions only present when the occupant is in the questionable indoor environment. A building scientist who is sent to collect samples and log data for an IAQ survey can use occupant interviews as a starting point, but he or she should not rely on these first-hand accounts as the sole vector for the investigation. Occupants within in a building can easily have a preconceived idea of what is causing an IAQ issue. After all, they are in that environment day in and day out. But many times, it’s the least obvious stimulus or a combination of factors that is causing the IAQ issue. That’s why the scientific method and the concept of the null hypothesis is important to indoor air quality investigations.

Consider this situation: Employees complain about coughing and throat irritation in a particular area of their office building. A building scientist comes in to begin an assessment and interviews those affected. A few of the occupants point out dark gray dust around the vents on the ceiling. So, the investigator goes right to the visual sighted areas and takes tape lift samples, along with air samples. Not surprisingly, the samples test positive for fiberglass, and are slightly elevated compared to samples taken in other parts of the building and outside of the building.

Case closed right? Wrong. No doubt, the HVAC system is aging and at some point, should be more closely evaluated, however, the real culprit was something else entirely. When questioning the employees who were convinced it was dust/duct related, the IAQ specialist also asked if anything was new or had changed within the office. One of the subjects said that they had just replaced the shared copy machine. With that information the investigator also decided to conduct data logging using an air sensor in the vicinity of the copier. Lo and behold, elevated levels of ozone were being emitted from the new copy machine and the ventilation in that part of the office was substandard. If the indoor air quality investigations specialist had just singularly followed the preconceived notion that it was the HVAC system/ducts, the facility management team would have cleaned the HVAC system at a great expense and yet the issue would have persisted.

So, what is the null hypothesis, what kinds of errors can be encountered and why is it an important cornerstone to indoor air quality testing?

So how is the null hypothesis testing applied to indoor air quality investigations? Any IAQ testing protocol starts by an initial statement seeking to define the issue in question. This statement might be “The occupants in building X are complaining about odors.” The investigator then begins to scientifically test the assertion that there is a problem with odors by adopting the default null hypothesis and starts to collect data. The null hypothesis in this case would be “There are no discrete odors in building X.” Next alternative hypotheses are stated such as “Microbial growth in the HVAC system is the cause of odors in building X” or “VOCs are the cause of odors in building X”. In most cases the facility manager or occupants suggest the possible causes for the complaints. Direct feedback from the site is important to the development of alternative hypotheses.

In the example mentioned above the investigator sets out to disprove the null hypothesis. Since the IAQ investigator has encountered this type of complaint before, he or she starts with the alternative hypothesis of “microbes in the HVAC system are causing the odors”. Therefore, a strategy is designed to collect samples specifically for microbes and parameters are set. Air and surface samples are taken from both the complaint and non-complaint areas as well as outside of the building. Remember that the purpose of the specific testing is not to prove that odors are caused by microbes, but rather to reject the null hypothesis that “there are no discrete odors in building X.” If analysis shows no elevated concentrations of microbes in building X, that does not prove that the null hypothesis is correct. All that it shows is that another hypothesis needs to be tested. However, if the analysis comes back and elevated levels of microbes are reported then with some degree of confidence the null hypothesis can be rejected to conclude there is an odor problem in building X. But that testing doesn’t necessarily prove the hypothesis that microbes in the HVAC is the cause of the odor. All it demonstrates is that there are higher levels of microbes. In many cases, IAQ issues can be caused by multiple factors and not just a single contaminant. This means other alternate hypotheses or parameters should be assessed to disprove the null hypothesis.

Encountering Errors with the Null Hypothesis

There are two basic types of errors that can occur when testing to reject the null hypothesis. The first is the Type I error which is known as a “false positive.” This error is where the true null hypothesis is rejected, and the alternate hypothesis is incorrectly accepted. For example, the IAQ investigator incorrectly concludes that microbes were the cause of odors, when in fact is was actually VOC’s from a new cleaning product. 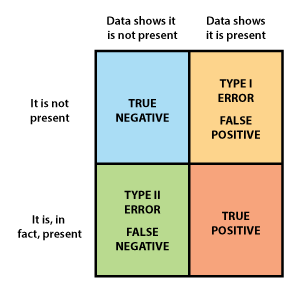 The second error is the Type II error or “false negative”. In this case collected data does not reject a false null hypothesis. Again, occupants complain about odors in building X. Indoor air quality investigations proceed to examine general parameters in building X, all of which come back as within the acceptable baseline, so it is concluded that there is not a specific odor issue. What the investigator failed to take into account was the time of day the odors were the strongest. If the investigator would have collected samples over an extended period of time, rather than just a narrow window of real time samples, he would have noticed a rise in VOCs in the morning and could have correlated it to just after the cleaning crew had performed their duties with a new product.

The best practice to avoid such errors is to collect enough data for the investigation. The more data collected in various forms, the less likely a false positive or negative will be produced. However, as with most credentialed indoor air quality investigations, focus and prioritization is key. A wide net approach to finding and solving IAQ problems should be avoided. Testing for everything under the roof can rapidly become unnecessary and cost prohibitive. If an IAQ investigator is unsure what to test for or does not know how to interpret the results then the chances of a wrong conclusion with a Type I or II error increases dramatically.

The Building Sciences team at Pure Air Control Services, Inc. is comprised of a professionally certified staff of engineers and industrial hygienists committed to compliant IAQ testing methods and protocols. They examine multiple parameters during the course of their indoor air quality investigations. While the Building Sciences team can focus forensic level investigations, they also provide two testing services that include specifically designed sample collections and data logging to determine the condition of the indoor environment compared to accepted baseline standards.

Building Health Check is an economical, yet comprehensive, evaluation of the indoor environment based upon HVAC zones. It combines Field and Laboratory assays to report on the biological conditions and performance of a building. Building Sciences and Environmental Diagnostics Laboratory conduct specific tests and analysis during their investigation including photo documentation. Air and Surface samples are collected for bacteria, mold, and particulates. Temperature, Relative Humidity and Wall Moisture is measured and logged. Finally, a HVAC Hygiene Assessment is performed. Once all the data compiled and analyzed a detailed report is provided. The report outlines the conditions of the building and can make remedial recommendations should above baseline IAQ issues be found.

A Building Health Check can be customized by adding or omitting assays or field protocols depending on the scope of the investigation. There are also options for Infrared Thermography, Mold and Bacteria characterization and speciation, as well as 24-hour turnaround time.

Building Sciences’ HVAC Hygienic Assessment starts with a close visual inspection of the air handling unit for cleanliness. This includes but it not limited to the evaporator coils, drain pan, blower and the corresponding duct work. Samples are collected from within the AHU, and performance testing is done to determine if there is any impact to pressure or airflow across the evaporator coils. These samples, along with other data logged from the inspection is sent to Environmental Diagnostics Laboratory for further testing and analysis to determine if bacteria or fungi is present and in what quantity. Finally, a detailed report, including a summary and helpful glossary is provided which includes performance data, microbiological results, photographs and recommendations for improvements.

The importance of intuitively using the scientific method with indoor air quality investigations and using specific parameters to test against a null hypothesis is significant when choosing the right IAQ testing firm. This basic understanding, if overlooked, can lead to costly mistakes that can impact the customers bottom line and occupant health.

For more information on Building Sciences at Pure Air Control Services, Inc. or to inquire about IAQ testing for your buildings, please contact us at 1-800-422-7873.